Three ways to connect with the Quran

He was a regular in that place. The place was a cave. On a mountain, around Macca. An empty cave surrounded by stars during the night and covered by the sky during the day. A cave where he went to watch over his soul and heart. He meditated in silence for days, alone, and liberated all his thoughts and emotions. He also spent his time worshipping. He didn’t know what but believed that he had to. Peaceful, the escape place helped him keep being lucid. And there, in the empty cave, came the first verse.

‘’Read’’, has he been told, after Jibril grabbed him.

‘’Recite by the name of your lord who created’’

And Islam came down through the 4th sacred book: Quran. If you have some difficulties to stay attached to the Quran and read it regularly, here are some ways to come closer and connect with the book of Allah ﷻ.

Through the first revelation that Gabriel came to get down to Mouhammed ﷺ, we can see many ways that will allow us to connect with the holy book. Before knowing anything about Islam and the Quran itself, the Prophet Mouhammed ﷺ liked to meditate and spend his time on worshipping to be spiritually elevated.

Looking up to breath in 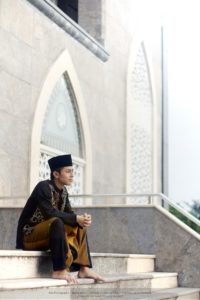 What is meditation? Meditation is about working on your mental well-being. Focus on ourselves and our breath to work on our souls and emotions. It will allow us to have better control over our feelings and liberate ourselves from anxiety, stress, and isolation from our everyday life. As a Muslim, you might ask yourself what the place of meditation in our religion is. As you know, the Prophet ﷺ liked to meditate and that’s not for nothing. Indeed, taking your time to feel what you recite and isolate yourself to be wrapped up in silence will help you to focus on worshipping and on healing yourself at the same time. As our Prophet ﷺ states: ‘’ O Abu Dharr! Two rak‘ats (cycles) of conscious and heedful prayer accompanied by meditation is better than one night of worship with a heedless heart’’. So being conscious of ourselves and being personally involved and connected to the action of worship is way better than just wanting to do a big amount of worship in which you won’t be fully concentrated (but I would like to remind you that during the holy month of Ramadan, every word that you pronounce has a big rewarding, so don’t feel constrained and give it your all ;D ). Meditating also involves a specific space that is dedicated to this action. You cannot meditate, fulfill yourself with a spiritual thought, and purify your mind while being focused on time and in a rush. The mind and space must be in a condition to be able to get to open the Quran and live in it, to be religiously elevated, and get back to basics.

The first word that Gabriel told Mouhammed ﷺ was to read. By reciting the Quran, we have to be aware that we are directly pronouncing the words of Allah ﷻ and that we intimately connect with him by feeling the greatness of his words. But how can we properly feel this virtue? The way we recite the Quran is melodic and has a verse sense in it. This allows the readers to access its beauty without necessarily having to understand everything about what they read because of the lack of Arabic knowledge. Being aware of the beauty of something will push you to discover more from it. If you have some difficulties regarding your recitation quality, first, never forget that Mouhammed ﷺ said: 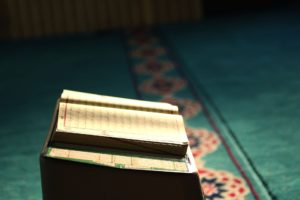 Verily the one who recites the Qur’an beautifully, smoothly, and precisely, he will be in the company of the noble and obedient angels. And as for the one who recites with difficulty, stammering or stumbling through its verses, then he will have twice that reward.

Finally, search for a reader who touches you with his voice. If you aren’t able to sense the beauty of the Quran with your own voice, then take this opportunity to progress basing yourself on a nice reading that makes you vibrate. Al Hamdoulilah there are many great readers that we can find with simple google research. Don’t hesitate to listen to them and learn about the Tajwid rules. Adding to that, reading the Quran mustn’t be seen as a bonus worship. It is one of the essential ways to worship Allah ﷻ and get close to him. As Allah ﷻ said:

And We have sent down to you the Book as clarification for all things and as guidance and mercy and good tidings for the Muslims [16:89]

Deepen your awareness to grasp the meaning of details

Finally, it has to be known that there are other ways of reading and meditating. Indeed, It’s not only about doing a good deed to yourself and feeling the greatness of the words of our creator. The effort of understanding and searching the deep meaning and way of application of a verse is also important and crucial to be able to connect with the Quran. To reflect on the verses, we have to understand them. That means, approaching Allah ﷻ must also be done throughout the knowledge. It is a trip in the multiple words that belong to our creator and that have been sent to our Prophet ﷺ. Understanding the Quran gets you to know about history, rich stories that give wisdom, the commandments of Allah, the nature of human beings, our Prophets, and so on. It is important to grow your knowledge because, by knowledge, you get a better sense of your worshipping and come closer to Allah ﷻ. Understanding the Quran allows observing the world in which we live with a different eye. The more you know, the more you make links. Little by little, you will find yourself thinking more about some verses you had red and use them as your guidance. Two stages will enrich our understanding of the Quran. The first degree of understanding comes by getting the meaning of the Quran’s verses by working on your Arabic or reading translations. It would be even better if you could read translations in different languages because it will bring greater clarity. But that’s not enough. 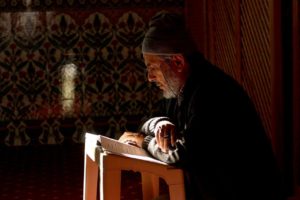 Indeed, we have to recall that Quraish was an Arabic tribe with a deep knowledge of the Quran’s language. But did they believe in it ? Respect it or applied it ? Not all of them were believers. Why ? Understanding the holy Quran is a step. A first one. But there is something left: the second step is to meditate on the sense of the words. That’s where the importance of Tadabbur comes. It’s about reading the verses and reflecting on them. Why have they been sent ? For whom ? In which context ? And, how can we apply them in our current life ? This takes time, effort, but in the end, you get as close as you never have been to the Quran, the creator Allah ﷻ, the prophet Mouhammed ﷺ and the whole message of our religion. The spiritual journey is rich. We have to be reminded that being pressured by time is of no use: it was narrated that ‘Abdullah – that is, ibn ‘Amr – said: The Messenger of Allah (blessings and peace of Allah be upon him) said: “No one properly understands who reads the Qur’an in less than three days.

The Quran is an intercessor, something given permission to intercede, and it is rightfully believed in. Whoever puts it in front of him, it will lead him to Paradise; whoever puts it behind him, it will steer him to the Hellfire.